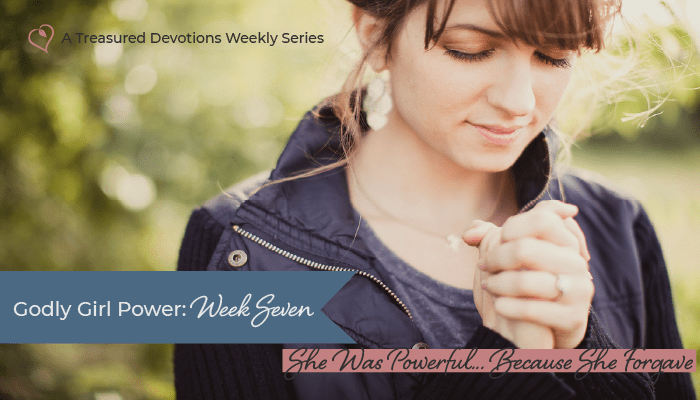 The wound in her soul was hidden to her eyes but not to her heart. The hurt continued to haunt her life as it seeped out of her soul and stepped into her thought life. No matter how hard she tried to forget what happened, her mind automatically reached into her soul and retrieved the repressed hurt, replaying it again and again. The wound owned her, and it was growing bigger even though her offender was miles away.

She wanted to be free. She felt powerless.

“Just forgive,” she heard her pastor say. “Be kind and compassionate to one another, forgiving one each other just as in Christ God forgave you” (Ephesians 4:32).

But what IS forgiveness? Instead of this advice bringing freedom to her soul, it often brought frustration. She was tired of being a doormat others used to wipe their feet. But she had to do something. Her buried hurt emotions were building to the point of breaking her.

This struggle is my story. Is it yours too? Who doesn’t struggle with forgiving someone who hurt her heart?

Forgiveness is letting go of your right to retaliate by releasing your offender to God.

If you retaliate, you are allowing your offender to control your life. If you repress your emotions or deny them, you’ll swallow that anger and plant the seed of bitterness in your soul. Revenge, repression, retaliation . . . they all put you in a prison. But releasing the offense to God allows the GREAT I AM to control your life. And with that release comes freedom.

Being real about your hurt and bringing that pain to God opens the door for healing. Showing love to your enemies dissolves your offender’s power to hurt you because it confirms God is in control of your life.

When you release others, you open your hands to receive from God, the only One who can redeem and restore.

God wants you to be powerful, not passive. But godly girl power does not rest in revenge—it rests in love. Love is a powerful force and puts God in control instead of your offender. Forgiveness carves a path for the mighty river of God’s love and power to flow to you—and through you to others!

For you to be okay, you must treat the wound his way.

Who will rule your heart? Your offender . . . or God? God never gives us a command without promising the power to walk that truth. On your own, this love is impossible, but with God all things are possible.  Don’t let your offender steal your power one more day. Wounds are never easy to deal with, – just for today take the first step…bring God your willing heart.

She told God she was ready to forgive. She didn’t want to, but that was okay. God wrapped his arms around her and told her if she was willing, he would help her. It was a process and didn’t happen overnight. But when she let go of the painful relationship and released that person to God, a door opened in her soul. Redemption came in and healed the raw wound in her heart. God redeemed all that had been lost in ways beyond anything she could have ever dreamed.

She was free. She was fearless. She was powerful . . . because she forgave!

(Jesus said the truth will set you free. At Treasured Ministries we believe that two of the biggest barriers to forgiveness are misconceptions about forgiveness and how to practically put this command into practice. To discover more about this topic listen to these two podcasts.