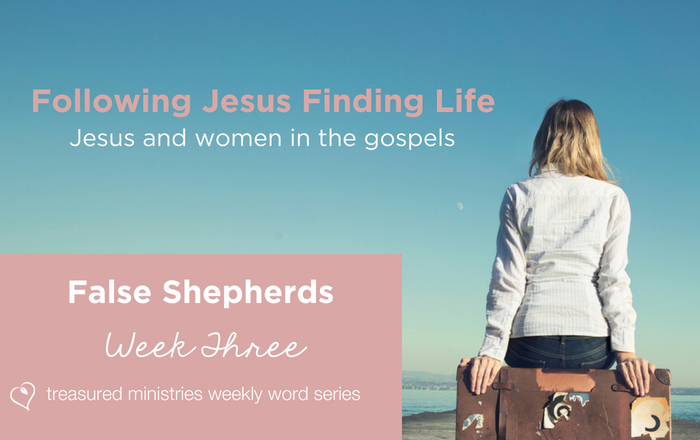 The men threw her before the crowd—she had been caught in the act of adultery. Her dignity died, and fear eclipsed her heart. Pulling the blanket she had grabbed from her crime scene tightly around her shoulders, she was barely able to cover her nakedness. However, she could find nothing to cover the awful shame that settled in her soul.

Wanting to defend herself, the woman tried to find words to tell the crowd she had been trapped, but her throat, thick with fear, would not allow the words she screamed in her mind to escape. These men carried great titles as Pharisees and teachers of the law. She knew that as a woman, her defense was useless.

She was completely vulnerable… until Jesus defended her.

The Good Shepherd stood between the woman and the false shepherds to intercept the stones he knew were coming. He purposefully stooped down to write in the dust. The Good Shepherd’s fingers made patterns in the sand and perhaps created words. Like a welcomed pause between the thunder claps in a horrible storm, whatever he wrote stilled her angry accusers for a moment.

The false shepherds were Pharisees, and teachers of the law. Their voices returned and demanded an answer.

“Teacher,” they said to Jesus, “this woman was caught in the act of adultery. The law of Moses says to stone her. What do you say?” John 8:4–5 NLT

The woman shivered at the thought of the stones.

Her only hope rested on the man before her who was writing in the sand. Wiping the tears from her eyes, she tried make out what he was writing, but it remained a mystery.

The man arose with gentle strength and carefully chose his words.

“All right, but let the one who has never sinned throw the first stone!” John 8:7 NLT

A stillness hit the air as silence filled the crowd. The woman was stunned. A man she had never met seemed to know what really happened—as if he could see inside her heart and theirs. He stooped down again to draw in the dust as one by one her accusers dropped their heavy stones and slipped away.

Many Women Have Been Hurt by False Shepherds

Have you ever been hurt by someone who carried a title inside of church and it caused you to struggle with your faith? Me too.

The greatest hurt I have experienced came from church leadership. And as I have ministered to women over the years, I have learned I am not alone. This may have happened to you or someone you love.

Many women after being hurt at the hands of church leadership want nothing more to do with God. I can relate and truly understand.

There are shepherds after God’s heart who love and treat women the way Jesus treated women—with great love and respect. However, there are also false shepherds who abuse their power, twist truth to manipulate, condemn with their words, and play on the strings of vulnerable women.

Most importantly, there is only one Good Shepherd who loves you beyond measure.

As our family began our journey back to church, the Lord gave me this promise to cling to. “And I will give you shepherds after my own heart, who will guide you with knowledge and understanding” (Jeremiah 3:15 NLT).

Our family found that kind of church and you can too. Your Good Shepherd promises to lead you with his still small voice.

Then Jesus stood up again and said to the woman, “Where are your accusers? Didn’t even one of them condemn you?”

And Jesus said, “Neither do I. Go and sin no more.”

Jesus spoke to the people once more and said, “I am the light of the world. If you follow me, you won’t have to walk in darkness, because you will have the light that leads to life.” John 8:10–12 NLT

Discover how to connect with God’s Word in a way that transforms the way you live. Download Nourishing Your Heart today.