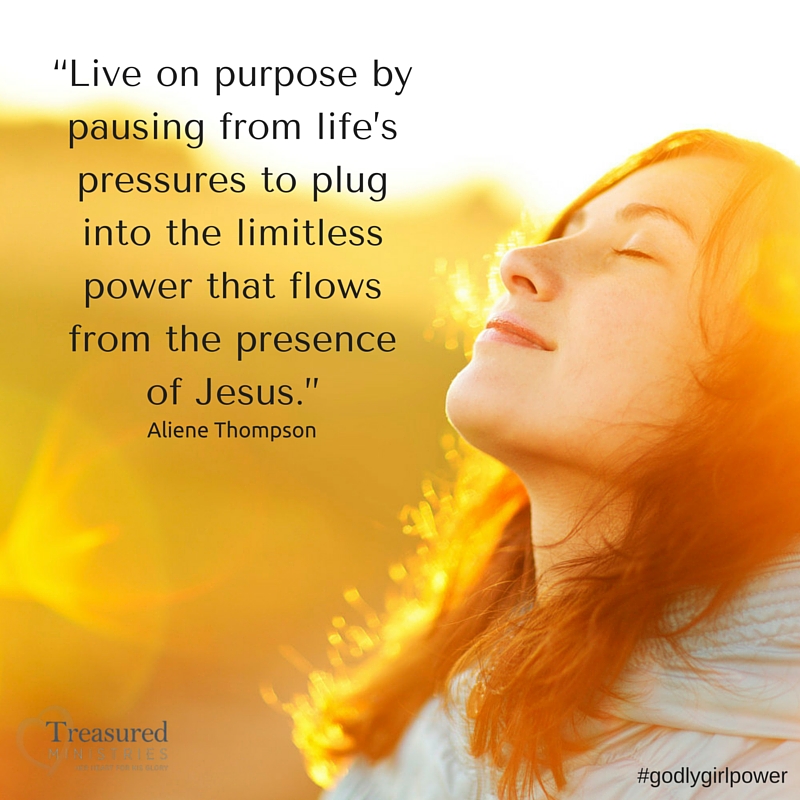 Live on purpose by pausing from life’s pressures to plug into the limitless power that flows from the presence of Jesus.

She Was a Warrior

She gave up her power by surrendering to people instead of her Savior.

But God loved her and would not leave her this way. She was a treasure. He had chosen her. It gave him great joy to adopt her as his child. He never intended her to be a victim of her circumstances or other people. She was his daughter. He intended her to live for His glory and love others by walking in the strength that only he could provide.

But she had to be taught a new way to think and live. She had to learn that her power was not outside her in the form of other people.

The power was within her through the Holy Spirit.

This was important. Whatever we see as our source of power also controls us. If she recognized him as her source, she would be free to live for him.

She Had Godly Girl Power

Godly girl power was a part of her inheritance. Like a holy thread connecting her to heaven, the presence and power of Jesus within her was a confident hope she could hold onto in this broken world—hope that a great and glorious inheritance was yet to come (Ephesians 1:14).

Yet while she lived in this broken world, she would need God’s all-surpassing power to walk in her purpose. This power was the same power he had used to defeat sin and death by raising Christ on the third day (Ephesians 1:19-20). This power was nothing she earned. He freely gave it through the indwelling of the Holy Spirit (Ephesians 1:13).

Having this power and using this power were two different issues altogether. Even though she was his daughter, she was used to thinking like an orphan.  She was used to depending on herself and other people. While she had godly girl power within her, the old ways she had used to find strength when she was far away from God had become familiar ruts in her thinking and gave way to comfortable bad habits.

Her journey to change her source of power would begin with her mind.  He was calling her to live differently by retreating and renewing her mind instead of trying to change her behavior.

Renew Your Mind by Pausing Each Day

Power always comes from a source. Godly girl power comes only from God himself. To plug into God’s power, we must pause and pull into his presence daily.

An expert archer keeps his arrows in his quiver, close to him, so he can sharpen and polish them, releasing them again and again with power, purpose, and precision. Like the expert archer, God is calling his daughters to retreat into his presence to prepare and position their heart to be released for his glory.

Wherever you are in your walk with God, you are never too far along to retreat inside God’s quiver and share sacred times close to him. It is in his quiver, concealed and sharpened, that we plug into godly girl power and our hearts are released to live for his glory.

The world is a battlefield where brave hearts make a difference. Come away in his quiver, brave heart. The sole purpose of the Treasured Devotions is to inspire you to connect with God through his Word so you may live aimed and active in your God-given purpose.

Renewing our minds is a lifetime process that brings transformation because our faith and action always walk hand in hand.

Paul began his letter to the Ephesians by reminding those believers of key beliefs about God and their inheritance in Christ. Ten years earlier when Paul had founded and discipled this church for two years, I am certain he taught these same fundamental truths. Paul started with belief, not behavior. I believe Paul knew this truth: renewing our minds is never a one and done deal. Paul started with belief …

What do you start with, braveheart?

Take the next steps by downloading Nourishing Your Heart to learn how to connect with God’s Word in a way that transforms your life and helps you become the woman you’re meant to be.