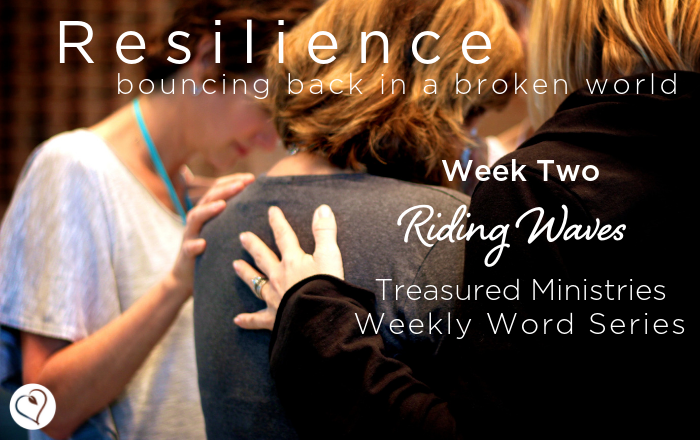 The waves roared, carrying the energy of the wind and currents before eventually folding upon the sand. The surf ran swiftly to the end of its journey to say a quick hello where she stood at the edge of the shore. Circling around her toes and then her ankles, the wave kissed her feet before making its retreat, leaving her feet encircled by sea foam. Washing away the sand beneath her feet, the wave eroded a small part of her foundation, and she sank deeper into the sand.

Before she had time to lift her feet, another wave was on its way to repeat the process. And then another came. Each time, she sank ever so slightly deeper.

She began to think about her past and how waves caused by the currents and winds of a broken world similarly eroded her spiritual foundation, little by little. She had no control over the waves that kept coming and crashing on the shore.

As waves are a part of the turmoil wind creates in the ocean, pain is a part of life inside a broken world.

And it comes in waves.

As each wave came, a little part of her foundation slipped away.

Tears fell from her eyes and sat on her cheeks. Her wind-swept hair found a resting place when the strands stuck to her tears. As she lifted her hand to clear away the hair obstructing her view, her eye caught a group of boys surfing.

She paused and pondered how they were using the waves to their advantage. They rode the waves. The energy of the wind and currents carried them. If they fell, they got up again, rushing right back into the water. Their laughter rose above the ever-present hum of the waves. They did not stand on sand . . . they stood on their surfboards. Instead of fearing the waves, they used the waves to move forward.

Using the Waves to Move Forward

In that moment, she felt the Lord’s presence standing right beside her.

The Holy Spirit whispered to her heart, “Let me teach you how to ride the waves of a broken world to bring you joy and show others my glory. I am greater than any wave you face. As you stand on the foundation of my presence instead of the shifting sand of circumstances, your survival mechanisms, and your emotions, the waves will not break you—they will build you. Live with great expectation by looking up.”

Now we live with great expectation, and we have a priceless inheritance—an inheritance that is kept in heaven for you, pure and undefiled, beyond the reach of change and decay. 1 Peter 1:3–4 NLT

Riding the Waves with the Holy Spirit

In eternity the waves of a broken world will not exist. In fact, the Bible tells us that seas, along with our tears, will cease (Revelation 21:1)! But for today she could face the waves, knowing that the Holy Spirit was there.

She was never alone. She was God’s child.

Nothing could ever take that truth away from her.

The power of the Holy Spirit was greater than the power that existed behind the waves. She was getting ready to discover how to ride those waves—and the first step was to live by looking up. She looked up, and as expectation filled her heart with joy, she lifted her feet from the sand.

Live with great expectation by looking up to eternity. The very best is yet to come.

She lifted her head and her heart filled with joy. Greater days were ahead. It was time to bounce back from the broken world and see hard times as a force to carry her closer to Jesus.

Like a holy thread connecting her to heaven, the Holy Spirit pierced through the darkness and offered a foundation to live through the storms of life—not merely to survive but to soar.