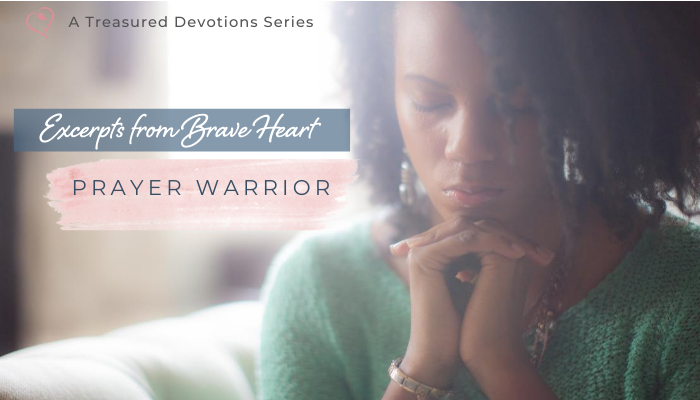 Are you are overwhelmed because God has asked you to do something beyond your ability and doubt is starting to build. The next time you catch yourself speaking doubt, quickly choose to exchange those words for a prayer of faith in His unfailing Word.

Childlike faith says, “God, I trust you to answer my prayer in your appointed time by your ability according to your unfailing Word.”

Faith acts like a bridge between God’s promises and the fulfillment of those promises. Prayer is a part of that process. Our prayer life reflects what we believe about God and ourselves. If my prayer life is small what does this say about what I truly believe about God?

A religious mindset might lead you to think you must earn God’s answer or even do your own mountain moving, but faith says to stop striving and ask and believe!

Faith says to pray based on who God is not what you think you deserve. Let him sort out your motives, but never pull back in false humility and decide to pray small because the enemy has told you are unworthy to ask. Pray boldly and then leave the results to God.

Joshua was not reluctant to pray boldly. When Joshua fought the five kings of the Amorites, he prayed that the sun would stand still:

On the day the Lord gave the Israelites victory over the Amorites, Joshua prayed to the Lord in front of all the people of Israel. He said, “Let the sun stand still over Gibeon, and the moon over the valley of Aijalon.”  So the sun stood still and the moon stayed in place until the nation of Israel had defeated its enemies. (Joshua 10:12–13)

Now that was a bold prayer!

Back in biblical times, people believed the sun revolved around the earth. Joshua was asking God to make time stand still. Joshua’s prayer inspires me. The God we serve created the world in six days and invites me to ask him in prayer? For heaven sakes! Pray big and bold!

Joshua’s prayer was not a long one—or even well thought out. It was not a religious prayer, but it was a bold one—and God answered. Never let a Pharisee convince you that prayer has to be a complicated formula with hoops for you to jump through. Prayer is talking to God and he commands us to ask boldly! Because of God’s grace, we can expect God to move mountains for us in his own timing according to his will.

We are blessed to have the King of all creation listening and answering our prayers.

Jesus said, “Ask and you shall receive.”

Ask God for the Impossible

Jesus said, “Suppose one of you has a friend, and he goes to him at midnight and says, ‘Friend, lend me three loaves of bread, because a friend of mine on a journey has come to me, and I have nothing to set before him.’ Then the one inside answers, ‘Don’t bother me. The door is already locked, and my children are with me in bed. I can’t get up and give you anything.’ I tell you, though he will not get up and give him the bread because he is his friend, yet because of the man’s boldness, he will get up and give him as much as he needs. So I say to you: Ask and it will be given to you; seek and you will find; knock and the door will be opened to you. (Luke 11:5–10)

Pray boldly and see God answer mightily. So today meditate on these three truths and build childlike faith by rekindling your prayer life.

In life, it’s only natural for our faith to become fragile. When this happens choose to PRAY! The enemy of your soul would love nothing more than for you to become so frustrated that your prayer life fades. Your prayers are powerful, brave heart. So keep on praying!